Why Subthreshold Laser Should Be the Treatment of Choice for Glaucoma Patients?

Subthreshold laser therapy delivers a substantially improved risk profile and SLT is now indicated as a first-line therapy for successful management of POAG and ocular hypertension. 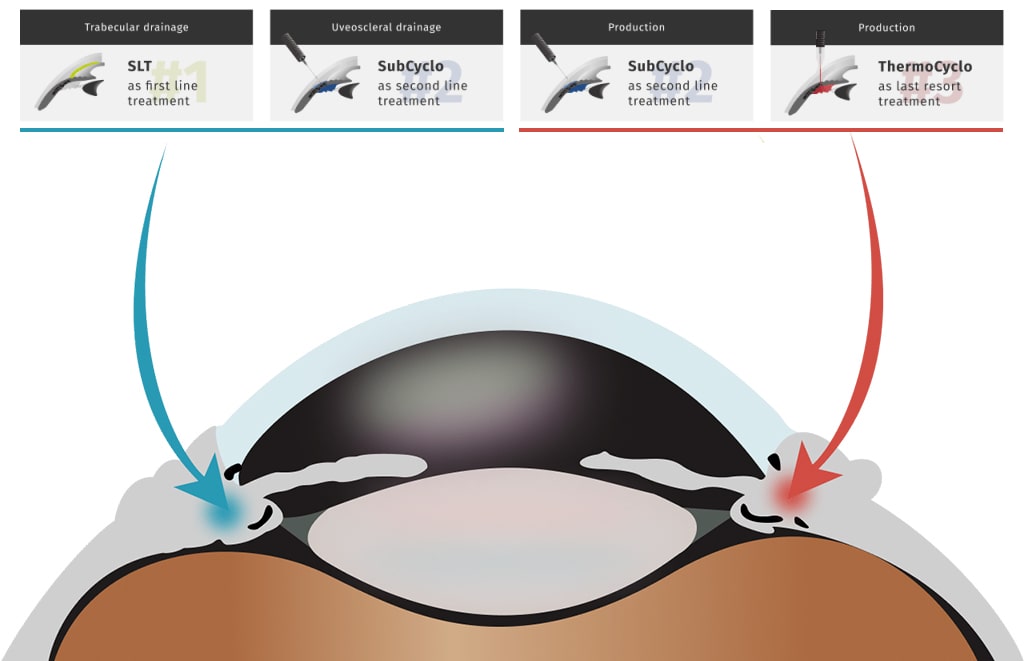 LASER TRABECULOPLASTY: FROM ALT TO SLT…

Laser treatment of POAG and ocular hypertension has been used for decades. In the 1990s, the GLT study1 demonstrated equivalence in efficacy between Initial treatment with argon laser trabeculoplasty, (ALT), versus topical medication. However, given its associated risk profile, ALT is not considered a first-line treatment option.

Around the same time Mark A. Latina, M.D. of Tufts University, Boston pioneered the concept of selective laser trabeculoplasty (SLT).

SLT induces a biological response in lowering IOP with equivalent efficacy, but without the thermal damage and irreversible structural changes to the trabecular meshwork, intrinsic with ALT.

Subthreshold laser therapy delivers a substantially improved risk profile and SLT is now indicated as a first-line therapy for successful management of POAG and ocular hypertension2; demonstrating repeatability, while maintaining IOP at or below target over considerable time.3

Cyclodestruction has been a treatment option for refractory glaucoma since the 1930’s with Cyclocryotherapy among the first techniques used to partially destroy the ciliary process.

Incremental improvements in technique and technology over time have resulted in diode laser options which are safer and as effective.

ThermoCyclo relies on continuous delivery of laser energy to destroy the ciliary body, with unavoidable collateral damage to surrounding tissue.

Due the risk profile associated with Thermocyclo it is usually reserved for eyes with the poorest visual prognosis.

Subliminal Cyclophotocoagulation, (SubCyclo), based on the principle of TSCPC, demonstrates similar efficacy with a vastly improved safety profile.

SubCyclo delivers subtle laser pulses interlaced with large periods of laser off time, to avoid accumulation of heat to a destructive level.

Recent studies have shown SubCyclo to be as effective as TSCPC with significantly less risk.  SubCyclo is also REPEATABLE.

SubCyclo is an excellent alternative to medical and surgical treatment options, including MIGS and may be considered earlier in the glaucoma treatment paradigm.2 3 4

Learn more about those treatments

World leader in ophthalmology, its lasers and ultrasounds are designed to diagnose and treat the four main causes of blindness: cataracts, glaucoma, diabetic retinopathy and macular degeneration; and also dry eye disease.

We use cookies on our website to improve your experience throughout your browsing, by offering you the appropriate content during each of your visits. By clicking on "Accept", you confirm the use of ALL cookies. Read More
Cookie Settings AcceptReject
Manage consent